NO ORDINARY LIFE ~ Awakenings in the Final Days of Apartheid

NO ORDINARY LIFE: Awakenings in the Final Days of Apartheid
Now available on Amazon! Click here! 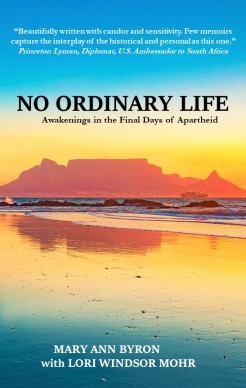 At 29, Mary and her diplomat husband, a special agent, embark on a two-year assignment to the U.S. Embassy in South Africa.  A continued campaign of economic sanctions from the international community has pressured President De Klerk to negotiate with recently-freed Nelson Mandela to end apartheid with the end goal of democratic government. The transition from single to multi-party rule brings conflict, bloodshed as on-again, off-again negotiations create a culture of violence. Uncertainty about the future hangs like a cloud cover over the South African heat.

It is into this powder keg environment that Mary and Patrick arrive in Cape Town in August 1992 on their first diplomatic mission as a couple. A Special Agent in Diplomatic Security, Patrick must protect the Ambassador and the American community. Negotiations have broken down again after the latest massacre, the black townships are embroiled in gang warfare, and  Americans lives have been threatened. Patrick immerses himself in work while Mary is left to find her way.

Stripped of her name and identity, Mary—Mrs. McGhee to the State Department—is denied permission to work in her field of public relations due to the current high risk. She refuses to be shuffled into passive domesticity as a ‘trailing spouse’.  Mary lands a job at the American Embassy.  But the unrelenting stress of Patrick’s job along with the constant threat of danger for both he and Mary—including surveillance 24/7 by National Party spies—takes a toll on the marriage. A growing malaise settles between them.

When an American young woman is murdered by a black mob outside Cape Town, Mary is shaken to the core. The American community is on edge. After yet another massacre, Patrick insists Mary learn to shoot. But no gun can protect her when the Hard Rock Cafe is bombed killing and injuring many.

Everything in Mary’s world is falling apart. A dozen times she makes plans to go home. But she is in love with her husband and won’t leave. She’s also aware of what it means to be part of this watershed moment in history, if the country can make it to an election before imploding. The whole world watches the drama unfold.

Mary’s story unfolds in not only in Cape Town, but in the wilds of Kruger Park Game Reserve, the beauty of the wine country of the Western Province, and the captivating Atlantic coastal peninsula to the tip of Cape of Good Hope. In these stunning settings, she and Patrick find each other time and again while exploring the beautiful South African countryside

This personal story of marriage in a foreign land parallels the political turmoil in Cape Town as the election draws near. On a professional level Mary finds her footing, organizing U.S. Congressional Delegations and diplomatic events.  But as plans for the election flounder, so does her relationship with Patrick. As the country goes to the brink and is transformed, so too, Mary changes from an idealistic, naive Midwestern girl to a mature woman committed to the mission of liberation for all South Africans, and determined to save her marriage.

Beautifully written with candor and sensitivity, evoking the highs and lows of that period, the impact on Mary and her colleagues of constant tension and worry, and the challenges in her marriage as both she and her husband become more engrossed in their work and more deeply affected by their environment. Few memoirs have captured this interplay of the personal and the historical as well as in this work. – Princeton Lyman, U.S. Ambassador to South Africa

“Once I started Reading, I could not stop! What an adventure. I felt like I was there with Mary.” – Joanna Davidson, The Denver Post

Learn More About
NO ORDINARY LIFE

NO ORDINARY LIFE: Awakenings in the Final Days of Apartheid
Now available on Amazon! Click here!

For information and inquiries about Mountain High Publishing, please connect with us by completing the contact form below.